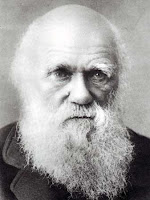 Diário a bordo do Beagle (exertos)

St. Jago. C. de Verd's
1836
August 17th
sea-sickness. — But it is on the road to England; in truth some such comfort is necessary to support the tedious misery of loss of time, health & comfort. —
21st
We crossed the Equator. —
31st to Septr 4th
After a most excellent passage, we came to an anchor early in the morning at Porto Praya. We found lying there, as commonly is the case, several some Slaving vessels. The weather, during our short stay of four days was very fine, but as this was the beginning of the unhealthy season, I confined my walks to short distances.
I have nothing to say about the place; as some rain had fallen, a most faint tinge of green was just distinguishable. Our old friend the great Baobab tree was clothed with a thick green foilage, which much altered its appearance. As might be expected, I was not so much delighted with St Jago, as during our former visit; but even this time I found much in its Natural History very interesting. It would indeed be strange if the first view of desert volcanic plains, (a kind of country so utterly different from anything in England) and the first sensations on entering an ardent climate, did not was excite the most vivid impressions in the mind of every one, who takes pleasure in beholding the face of nature.
4th
We were all very glad in the evening of the 4th to wish farewell to the irregular mountains of St Jago, as they disappeared in the
[page] 759