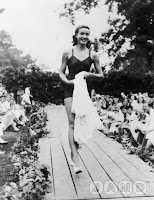 Drew Barrymore and Jessica Lange will star in Grey Gardens, reports Variety, which is a fact-based drama about two eccentric relatives of Jacqueline Kennedy who made headlines when the health department threatened to raid their flea- and raccoon-infested East Hampton, N.Y., estate.

Commercials director Michael Sucsy wrote the script and will make his feature directing debut on the project this summer. He'll produce with Lucy Barzun and Rachael Horovitz.
Barrymore will play Little Edie, and Lange will play her mother, Big Edie Bouvier Beale, the socialite cousin and aunt, respectively, of Kennedy Onassis. The Edies made headlines around the world when Jackie O herself materialized to rescue her family from public disgrace.
The Edies were then the subjects of Grey Gardens, a 1976 documentary by David and Albert Maysles, whose rights will be part of the movie package.
The documentary, which showed the women living in squalor, made a cult figure of Little Edie. She got a nightclub singing job as a result. Years after their deaths, the Edies have Web sites devoted to them as well as an Off Broadway play.
Sucsy, who summered in nearby Quogue, grew up with the legend of the women and hunted down rights to personal correspondence and journals that chronicle Little Edie's struggle to break free of her mother after they retreated from Park Avenue for the Hamptons.
The film will cover 40 years. Kennedy Onassis will be a character in the film, as will Ben Bradlee and Sally Quinn, who bought the crumbling mansion from Little Edie after her mother's death.